Antibiotic Guidelines in a Nutshell

Cloxacillin remains the drug of choice for all S. aureus infections where the isolate is deemed to be clinically significant. The percentage of methicillin-resistant Staphylococcus aureus (MRSA) strains detected by Lancet Laboratories in Johannesburg during 2014 was less than 20% from all specimens and 27% from blood cultures. Cloxacillin resistance is now detected in both hospital- and community-acquired isolates of S. aureus. Strains of S. aureus that are cloxacillin resistant are insensitive to all currently available penicillins and cephalosporins. The highest burden of MRSAs is found in long-term care facilities, patients who require chronic care, trauma units and large ICUs. These MRSAs are usually multi-drug resistant and treatment is often limited to the glycopeptides and linezolid. All of our reported S. aureus cultures are vancomycin, teicoplanin and linezolid susceptible. However, there are reports of resistance to all three of these antibiotics in other parts of the world. Fortunately this is not yet a problem in South Africa.

Most CNS isolates are skin contaminants. In recent years, however, these organisms have emerged as signicant causes of healthcare-associated infections. Staphylococcus epidermidis isolates are very often methicillin-resistant. Therefore, in patients with serious infections (e.g. infected prostheses or endocarditis) or with line sepsis, the empiric therapy for a clinically signicant CNS infection would be vancomycin, teicoplanin or linezolid. Resistance to these antibiotics are gradually increasing worldwide and treatment should be based on the antibiogram results. Please de-escalate as soon as possible when the antibiotic sensitivity of the isolate is known.

Penicillin resistance in S. pneumoniae isolates occurs due to changes in the penicillin-binding proteins (PBPs) of the bacterial cell wall, resulting in decreased afnity for penicillins and consequently a stepwise resistance to members of this antibiotic class. At a low minimum inhibitory quotient (MIC), this resistance can be overcome by increasing the dose of the beta-lactam antibiotic. Closed infections such as meningitis require higher doses of antibiotic to achieve adequate levels in the infected area. Thus higher MIC breakpoints are used to determine susceptibility for CSF specimens than for lower respiratory tract specimens and bloodstream infections.

The recommended empiric treatment for suspected pneumococcal meningitis remains a 3rd generation cephalosporin. In the event of intermediate cephalosporin resistance from a CSF isolate, the maximum dose of ceftriaxone (adults 4 g daily, children 50 ? 75 mg/kg daily) or cefotaxime (adults 4 g daily, children 50 mg/kg/dose 6 hourly) should be used in combination with another agent e.g. vancomycin or rifampicin. In the event of a fully resistant isolate from the CSF (luckily none have been reported locally) vancomycin is the drug of choice.

In isolates from the upper and lower respiratory tract displaying intermediate resistance to penicillin and/or 3rd generation cephalosporins, resistance can be overcome by dosing maximally with the chosen beta-lactam agent. Erythromycin sensitivity in lower respiratory tract specimens has been below 50% during the past few years. Levooxacin and moxioxacin and telithromycin are all still 100% active against beta-lactam resistant strains.

Prior to treatment of enterococcal infections, all intravenous lines, intra-arterial catheters, and urinary catheters should be removed if possible. Infections for which a single antibiotic directed against enterococci can be used include urinary tract infections (UTIs), most intra-abdominal infections, and uncomplicated wound infections. Combination therapy with a cell wallactive agent (e.g. betalactam) and a synergistic aminoglycoside should be considered for treating serious enterococcal infections in critically ill patients, and in those with evidence of sepsis, as well as in patients with endocarditis, meningitis, osteomyelitis, or joint infections.

Ampicillin is the drug of choice for monotherapy of susceptible E. faecalis infection. For rare strains that are resistant to ampicillin because of beta-lactamase production, amoxicillin-clavulanate may be used. Vancomycin should be used in patients with a penicillin allergy or infections with strains that have high-level penicillin resistance due to altered PBPs.

Nitrofurantoin is effective in the treatment of enterococcal UTIs, including many caused by vancomycin-resistant enterococci (VRE). Linezolid, daptomycin, and tigecycline, are the agents of choice for treating VRE infections

Infection control measures should be instituted for all patients with ESBL positive organisms.

The only antibiotic class currently proven to be effective in the treatment of severe infections caused by ESBL-producing organisms is the carbapenems (imipenem, meropenem, doripenem, and ertapenem). There are no clear differences in efcacy between imipenem and meropenem. The choice of one over the other is predominantly based on toxicity proles in specic hosts. Clinical data suggest that the efcacy of doripenem is equivalent to that of imipenem and meropenem. Ertapenem has the advantage of once-daily dosing and has good in vitro activity, but is reserved for treating susceptible ESBL-producing organisms that are not associated with severe sepsis.

ESBL-producing isolates typically show greater than average resistance to other agents, including aminoglycosides and uoroquinolones. Tigecycline, a tetracycline derivative, is a potential alternative for the treatment of ESBL-producing organisms, especially for patients with beta-lactam allergies.

For years, carbapenems have been used successfully to treat infections due to resistant Enterobacteriaceae, such as Escherichia coli and Klebsiella pneumoniae, including those producing ESBLs. However, carbapenem-resistant Enterobacteriaceae have recently emerged. This is most commonly due to the production of a carbapenemase enzyme which confers broad resistance to most beta-lactam antibiotics, including the so-called “last-line” carbapenems. Carbapenem resistance can also be conferred when porin deciencies (which restrict the entry of the beta-lactam antibiotics into the cell) are combined with ESBLs. The prevalence of CRE infections has increased over the last decade, especially in healthcare settings. CREs are now recognized by the US Centers for Disease Control and Prevention as well as other international healthcare agencies as an urgent public health threat.

Recently the following treatment algorithm using combination therapy for the treatment of CRE infections was proposed, based on the site of infection and antibiogram results². 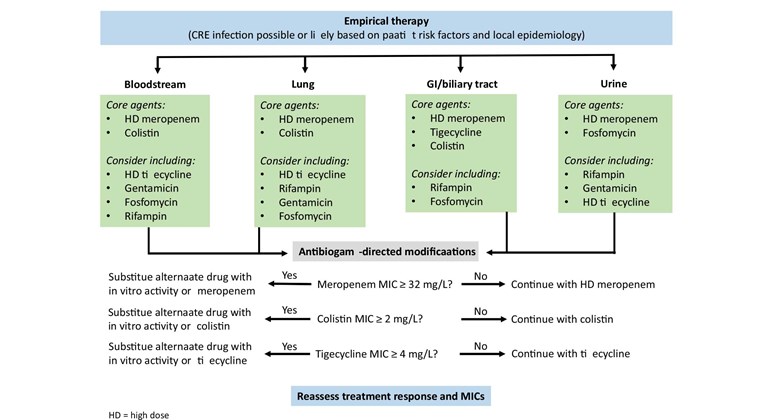 The empiric antibiotic of choice in the treatment of a community-acquired UTI remains amoxicillin-clavulanate or a 2nd generation cephalosporin. Please note that in 2014, 28% of E. coli isolates from the urinary tract were resistant to ciprooxacin in Johannesburg (26% in Pretoria and Cape Town, and 37% in Durban). This high rate of quinolone resistance should be kept in mind when empirically prescribing these agents to treat a community-acquired UTI.

Another option for the treatment of uncomplicated lower urinary tract infections (but ONLY where the organism retains susceptibility) is fosfomycin, which is a urinary antiseptic. Nitrofurantoin (also a urinary antiseptic) may also be considered, but is frequently out of stock in South Africa.

There are some strains of P. aeruginosa in the Gauteng region which are fully resistant. Colistin sensitivity is routinely tested, but there are practical problems with this antibiotic, and some strains are inherently resistant. In view of the rapidly increasing ESBL problem, the carbapenems have become the empiric choice in many ICU patients with suspected nosocomial Gramnegative infections. Please note that some Pseudomonas strains have isolated imipenem / meropenem resistance. In addition ertapenem has no activity against Pseudomonas aeruginosa, Acinetobacter baumanii, Burkholderia cepacia and Stenotrophomonas maltophilia.

Certain organisms (e.g. Enterobacter, Serratia, Citrobacter, Morganella and Providencia species) have a chromosomal gene that encodes inducible resistance to the 1st, 2nd and 3rd generation cephalosporins as well as ampicillin. Therefore the abovementioned antibiotics cannot be used for treatment of infections with these bacteria. Empiric therapy for all AmpC producing bacteria includes quinolones, the 4th generation cephalosporins (e.g. cefepime) or the carbapenems (e.g. meropenem, imipenem and ertapenem).

Cerba Lancet Africa on the continent